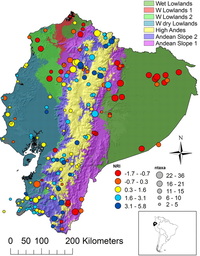 Determining why some regions in the world have such high biological diversity continues to intrigue ecologist and evolutionary biologists. We address this challenge by studying the highly diverse Andean hummingbirds at two different spatial scales. At the local scale, we are evaluating the phylogenetic and phenotypic structure in hummingbird communities. We combine information on spatial variation in habitat and climate to predict phylogenetic and phenotypic patterns of change across space at a regional scale. We are developing new approaches to quantify the relative role of mechanisms acting from local to biogeographic scales on the generation and maintenance of local diversity. This project is funded by DEB-NSF with Juan Parra as a co-PI and benefits from collaboration with Jim McGuire, Carsten Rahbek, Boris Tinoco, Daniel Cadena, and Gary Stiles.

Combining time-series data, ecology and physiology to predict the consequences of climate change on hummingbird diversity 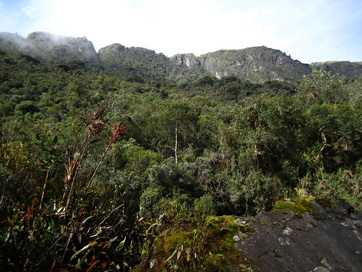 Climate change increasingly influences animal populations in both temperate and tropical ecosystems, yet we know little about how the majority of species will respond to these changes. This lack of knowledge limits our ability to predict species responses and manage them in the face of climate change. We are combining time-series data for hummingbirds with climate and remote sensing data to evaluate what changes have occurred in hummingbird populations. We are investigating variation in hummingbird resources and hummingbird physiological responses to different environmental conditions to start to determine why these changes might have occurred. Finally, we will predict how species, phylogenetic and functional diversity might be influenced by climate changes. This project is in collaboration with Scott Goetz and Pieter Beck, Susan Wethington, Don Powers and Tim Essington is funded under NASA's Biodiversity Program. 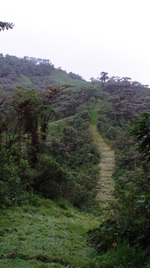 Integrating phylogeny and ecology to study diversity patterns of Andean hummingbirds
The scientific goals of the research in Cajas National Park, Ecuador are to quantify how avian community structure, demographics, and fitness correlates vary among relatively undisturbed Andean broadleaf cloud forest, disturbed Andean broadleaf cloud forest, and exotic forest plantations. The major effort of the project is on-going bird censusing by mist-netting and point counts. We have also studied the ecology and distribution of an endangered hummingbird, monitoring techniques for the Andean Condor and bird abundance and distribution in fragments of Polylepis forest. Our results are used for conservation planning in Cajas National Park. This project is in collaboration with Steven Latta, Boris Tinoco, Pedro Astudillo and benefits from funding and support from Cajas National Park. 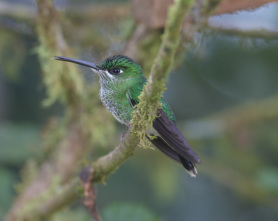 Little is known about plant-pollinator interactions in tropical hummingbirds, and how these interactions are mediated through phenotypic matching and phenology. We are developing a multi-faceted approach that combines species distributional modeling with observational and experimental studies across an elevation gradient in the Andes of Ecuador to increase the biological reality of predictions of species responses to climate change.  In addition, we are testing a series of hypotheses about the influence of resources and biotic interactions on range limits in hummingbirds. We identified over 25 hummingbird species (link), and 60 plant species (link), along this gradient in 2013. This work is being conducted at the Maquipicuna Research Station and Santa Lucia Ecolodge (0.11838,-78.61205), which together span an elevation range of 1200-2800m and is funded by a National Geographic Committee for Science Exploration Grant.

Integrating genetic, taxonomic, and functional diversity of tetrapods across the Americas and through extinction risk 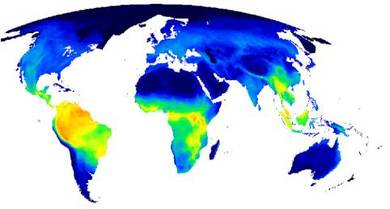 This project examines continent-wide variation in the phylogenetic, taxonomic and trait dimensions of tetrapod biodiversity. New data are being collected on the biodiversity and extinction risk of 2,500 Western Hemisphere reptile species. These data are combined with existing data for mammals, birds, and amphibians to measure and map the diversity of all 13,000 terrestrial vertebrate species of the Americas, in three dimensions. The first is phylo-temporal diversity, measuring the genetically distinctiveness of the species in an area. The second is compositional diversity, measuring which species occur in an area. And the third is trait diversity, measuring how the species in an area vary in place, food, time, and size niches. For each of the three dimensions, beta-diversity measures will reflect differences over space (dissimilarity). The research is important scientifically in representing novel, hemisphere-wide analysis of the genetic, taxonomic, and functional diversity of a major species group. This will allow determination of relationships among the three dimensions of beta-diversity, and explaining where and how they are more or less dissimilar in space. By using the extinction risk data, the analyses will help in the prediction of impending changes in these relationships. Finally, determine where the three dimensions of beta-diversity are incongruent may inform decisions regarding trade-offs in conservation efforts between them. This work is being conducted in collaboration with Tom Brooks, Bruce Young, Blair Hedges and Gabriel Costa and is funded under the NSF Dimensions of Diversity Program.